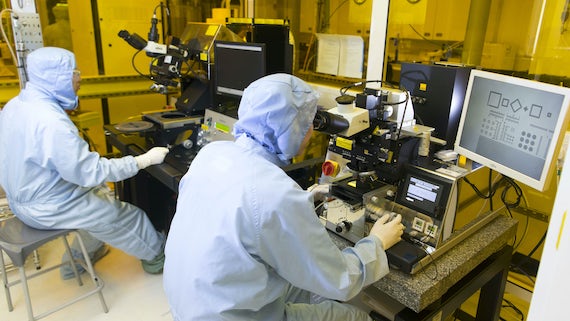 A consortium led by the Compound Semiconductor Centre (CSC) has concluded an Innovate UK-funded project to produce cheaper, faster devices that will drive tomorrow’s sensing technologies.

VCSELS are semiconductor laser chips that emit laser light from the top surface of the chip, rather than the edge, allowing tens of thousands of tiny lasers to be manufactured on a single wafer of semiconductor material in a simplified process. They can be tested on-wafer during the production process, resulting in lower fabrication costs compared to other laser technologies.

This will drive a step change in cost reduction for VCSELs, and thus their adoption in mass-market applications such as 3D imaging, proximity sensing, range-finding and light detection and ranging (LiDAR), used in autonomous vehicles.”

CSC’s work included the commissioning of a custom 150mm oxidation tool at the ERDF-funded Institute for Compound Semiconductors which is used for a particularly challenging stage of preferential oxidation of aluminium-rich layers in the VCSEL layer structure.

The 150mm VCSEL prototyping capacity leveraged by the consortium will combine with device-scale optimization and validation of VCSEL epitaxial materials to form a core research and manufacturing competence in the CSConnected Compound Semiconductor cluster in South Wales.

And CSC has been awarded Welsh Government project backing through the SMARTCymru scheme via the European Regional Development Fund (ERDF).

The funding will support a technical and commercial feasibility study for a CSC project to develop a vertical Gallium Nitride device manufacturing capability within the UK.

Vertical GaN has been identified as a suitable technology for lower voltage, lower power automotive applications including on board battery charging for hybrid and electric vehicles.